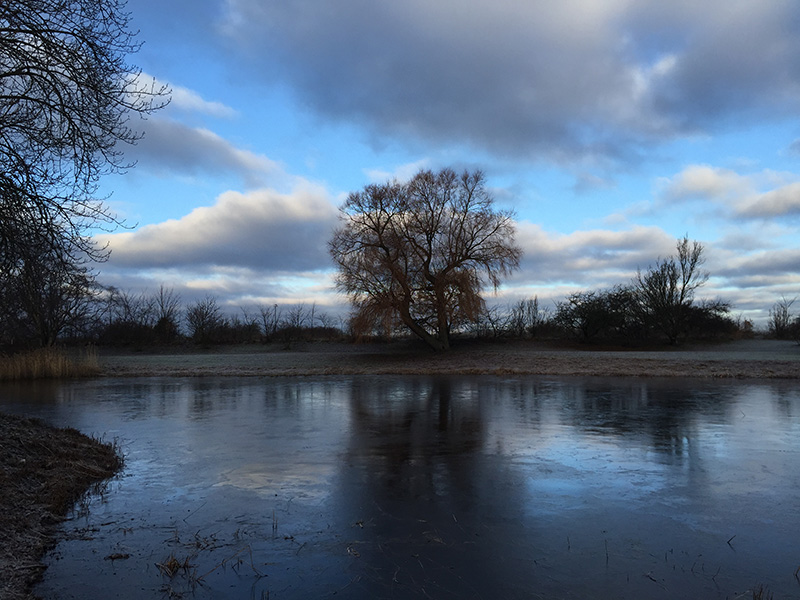 spring has sprung. the thaw is in. flowers are doing their berserk sexy business, and bees are crawling out of the ground. it’s the time for renewal! hope! starting fresh and a fabulous opportunity for some beginner’s mind!

this will be a quick post, just to get something out of the way… i generally spend more time working on preamp circuits and variations than anything else. and i have a minor obsession with buffers. partly because tubes aren’t naturally adapted to the job, at least for the more extreme or demanding types of applications. they are, after all, high and medium impedance devices… and not well suited for really low impedance loads. unless, of course, one makes some fairly intense interventions: additional devices and gain, and lots of negative feedback. this can be made to work but is not as easy as it sounds. it’s that, or keep your expectations low. that’s not so easy either.

actually, my friend, Frank Blöhbaum, has made some very interesting original tubed buffer circuits with very high amounts of error correction, and they sound fantastic: one of my favorites uses a heptode! but these are not simple circuits to explain to many DIY folk (not hard to make though!), and even he had to work a bit to get them stable. you owe it to yourself to look into these… the one i heard at ETF was simply wonderful.

the ideal device to make a buffer out of, would have a high gain/μ, a very low internal resistance/”on” resistance, and a crazy high transconductance. kinda like a bipolar transistor, right?

in any case, buffers are a wonderful puzzle, for me. and the useful ones are important tools in many designs.

so i also have something to share. it’s core concept has become a mainstay building block for Silbatone, and there are a fair number of variations. in South Korea, at least, the simple line amp has become quite popular and i think some may be interested in it, elsewhere. there was a kit made, although they are finished now, that sold out a run of 100 in 10 minutes! and finished ones that sold out very quickly… it might be the most well liked gadget i have worked on?

stefano bae, my dear friend and collaborator, and i have made many variations of this basic idea. the first was for a 3 stage direct coupled 300B amp (except for the output transformer. since then, the “silba cell” has been sneaked into all kinds of things we do.

but first, here is the slightly fancy line amp application. this can be built as is. 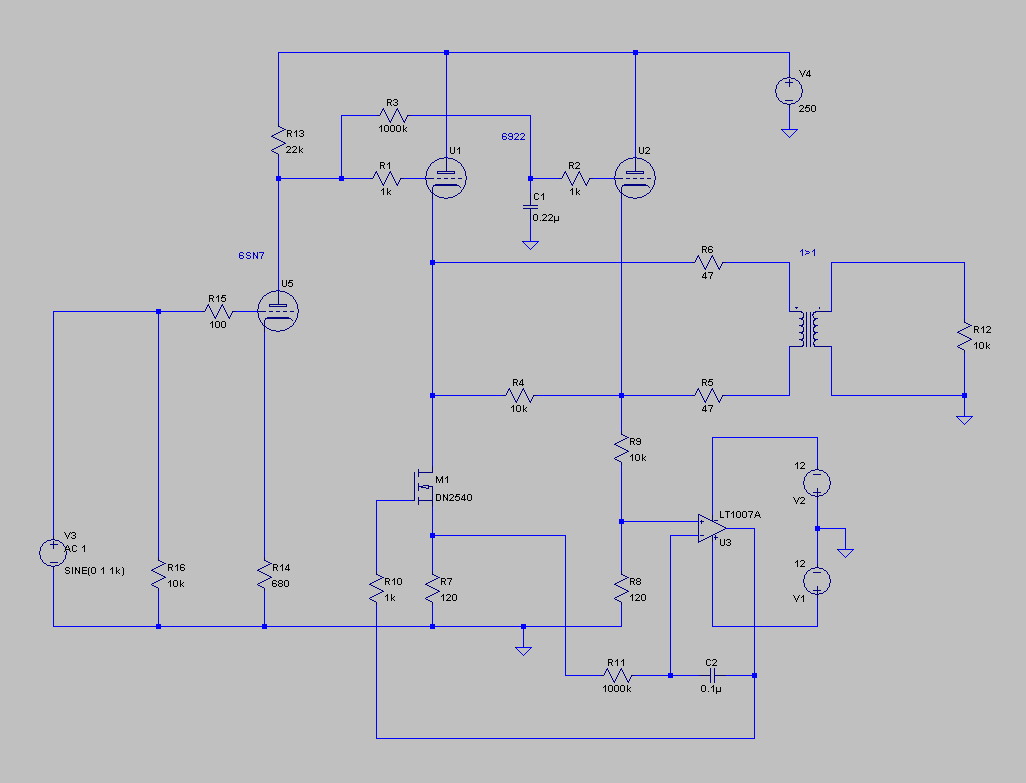 “what is all that un-necessary crap?”

and there isn’t one. but it is very simple, reliable and useful. i hope you are looking at the second half of the arrangement. it is a single ended direct coupled buffer driving a single ended transformer. “what?!”

yes. the second half of the 6922 is a servo. a DC amplifier. the first half is the basic cathode follower.

the second half 6922 simply strips the signal out and follows the DC of the first tube’s plate voltage. both halves are operating as cathode followers, and the current source is also servo’d so the two halves track more precisely. the punch line is: there are nano amperes of current in the winding of the un-gapped transformer, which is typically used in no DC service.

normally tubes drift and vary from one another quite a bit. they change constantly over their working life, in the negative direction, which has generally left them to the ridicule of many a know-it-all brick-for-brains engineering rube. it is clear, every circuit should be as independently self regulating as one can make it. also, i NEVER design anything that requires a matched set of tubes or leaves “user adjustable settings” (i’d rather suck a gun and pull the trigger). working in an S&M club against one’s will is a better choice than exposing oneself to that fucking crap. no… it is just a fact of life, and dealing with the variations is both adult and positive. the servo adjusts the reference point for the load (the transformer) over time so no DC current is allowed across the winding of the transformer.

i try to be positive and behave like an adult. i try. i just come up short, occasionally…

one could use a gapped transformer (that will handle the range of offset voltage/current) and simplify the circuit (get rid of the current source servo on U2). in fact i can hear dave slagle yelling in my ear that this is clearly the only sensible course of action… ha! and then again, he might not? however, it is my experience that costs too much in terms of low and high frequency extension and changes in the time domain, too. if you already have single ended transformer coupled amps, and now also a preamp with a similar bandwidth. they can also change behavior with loading or signal level. in any case, if you want to try this idea without the servo, you can use any typical gapped interstage single ended transformer that can handle 0-30mA, for most of the tubes people tend to prefer these days.

the main advantage of this circuit is that one can drive an un-gapped, nickel, amorphous, or iron-cored transformer (or all of the above at the same time) without the worry of saturation. why is that such a good idea? because making a closely coupled transformer with a high perm core material translates into lots of detail and isolation from power and environmental factors. and with this circuit, you can directly couple a single interesting historical amplifying device of your choice, to a buffer that couples to the load through your fancy transformer. without a center tap or unbalanced DC current in the windings. and the buffer keeps the load away from the voltage amplifier.

okay, so what is it and where did it come from? well, for those familiar with the “mullard” phase splitter, so widely used in the 1960’s consumer audio world, only a little imagination will be required to see the relationship: although in this case we are coupling cathode followers instead of a “long tailed pair”. i consider the “silba cell” to be the lost “black sheep” of the mullard family.

above you see a typical arrangement using a 12AY7 and a 6CG7. note the grid coupling for U3. i believe Alan Blumlein is responsible for the “mullard”…(?), one of the most successful front ends of the tube era.

and here is the core idea of the “bankill cell” (“bankill” is a korean pun… “half dead”). 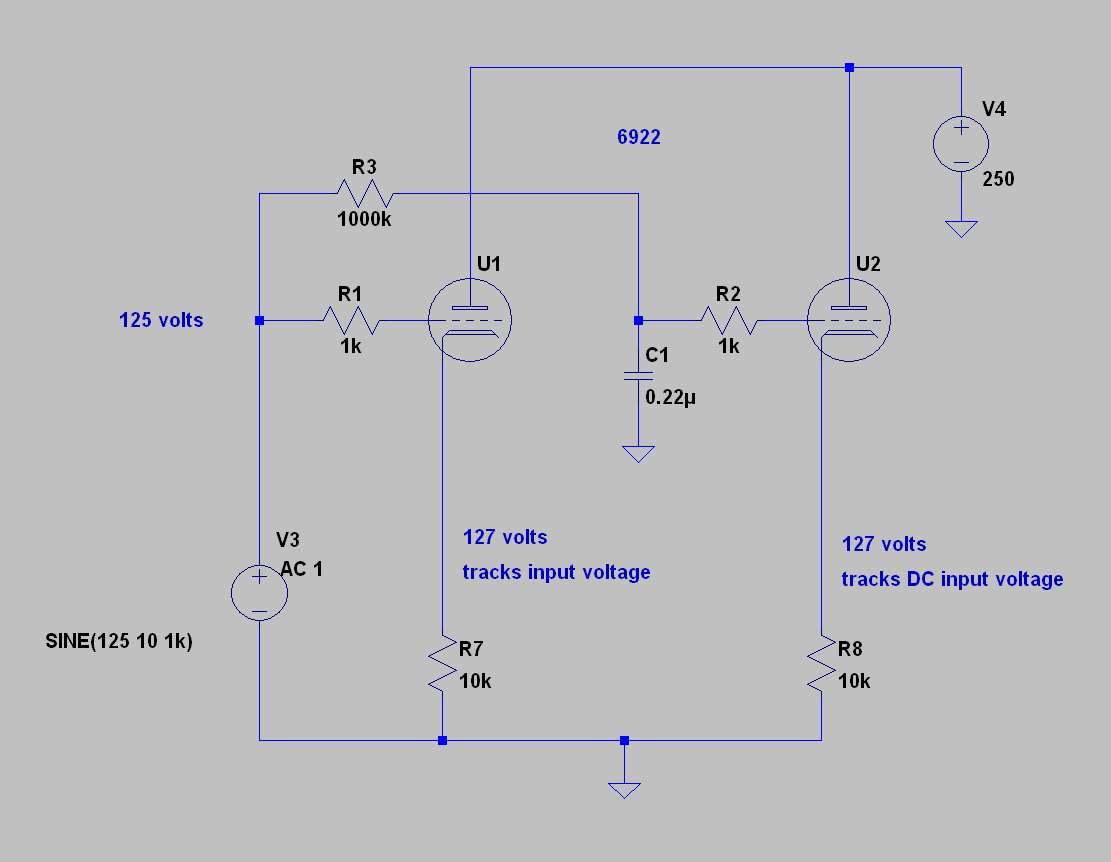 R3 and C1 form a very long time constant that filters out all audio, but not slow or DC variations. the cathode of U2 is free to follow the DC level of the signal input, which is ideal for another tube stage. if the two tubes share the same envelope and heater, they will drift together with temperature or power supply variations.

we use this technique all the time to directly couple one stage to the next. the servo creates a “floating ground” for whatever comes next.

but it works and is simple. hope it helps someone out there!

here are two additional buffer circuits i have recently come up with to handle really large swings, which a single MOSFET follower can’t always do with aplomb. both are fabulous. the all MOS version is especially good with the IXYS high voltage PMOS… by the way, the depletion MOSFET, M2, can be replaced with a tube. i would guess that a 6922 would drop in pretty close, with these component values. 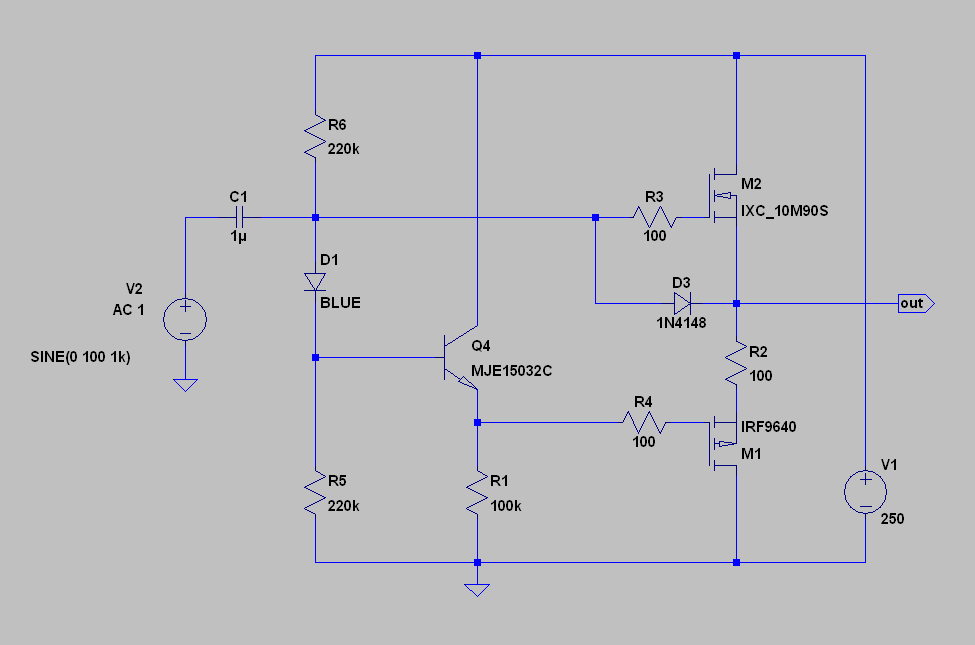 and here is the other. it is simple, inexpensive and high performance. turns any tube stage into a current dumping beast, if you need it to… you will need 50 mA to swing 10 volts across 600 ohms, for example. this will do it pretty. with 10 mA, you can swing 200 Vpp across 47K… the only adjustment is R2. make sure you have heatsinks! 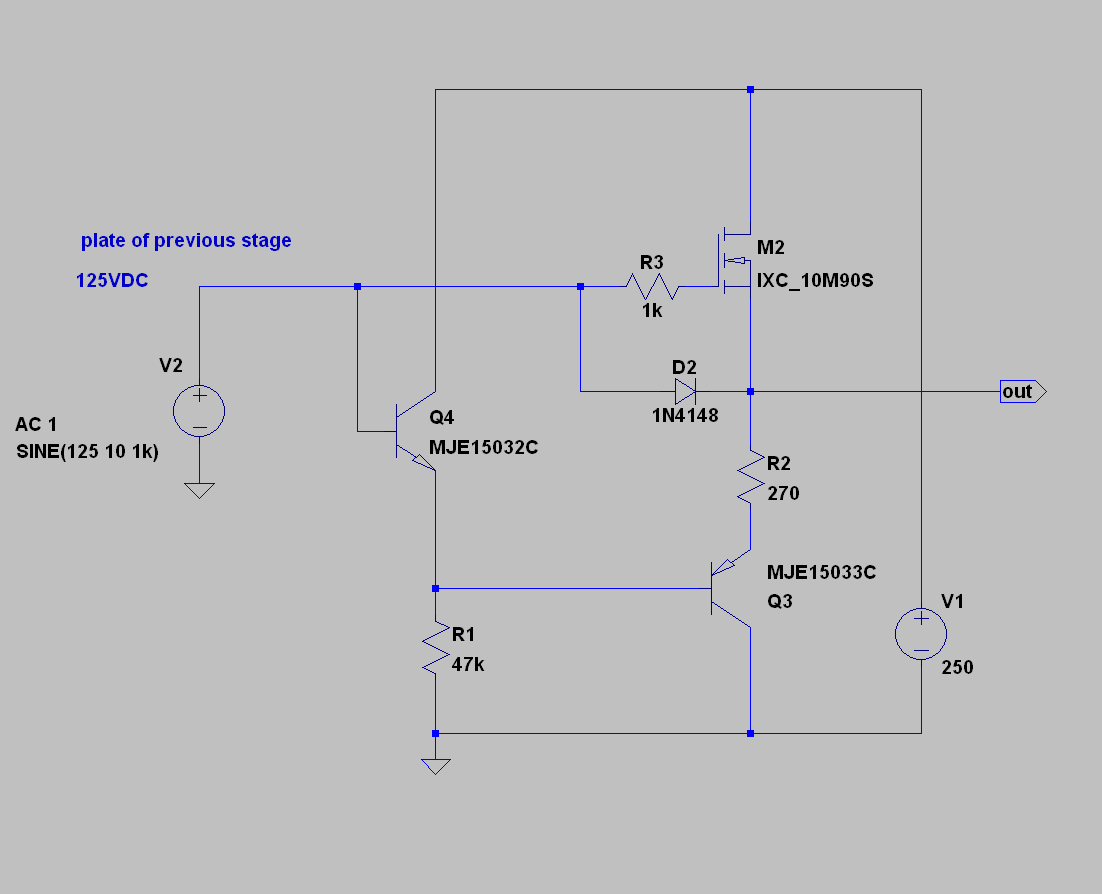 device under test… you see the prototype buffer below. 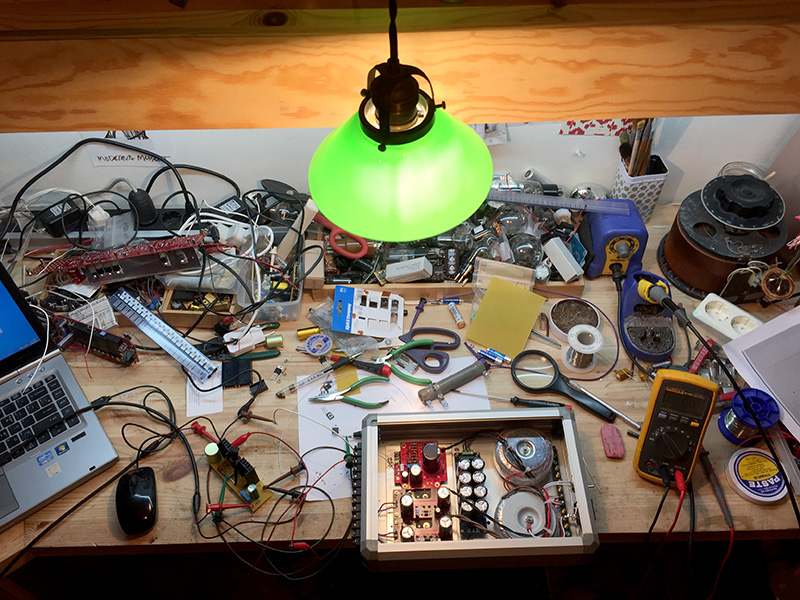 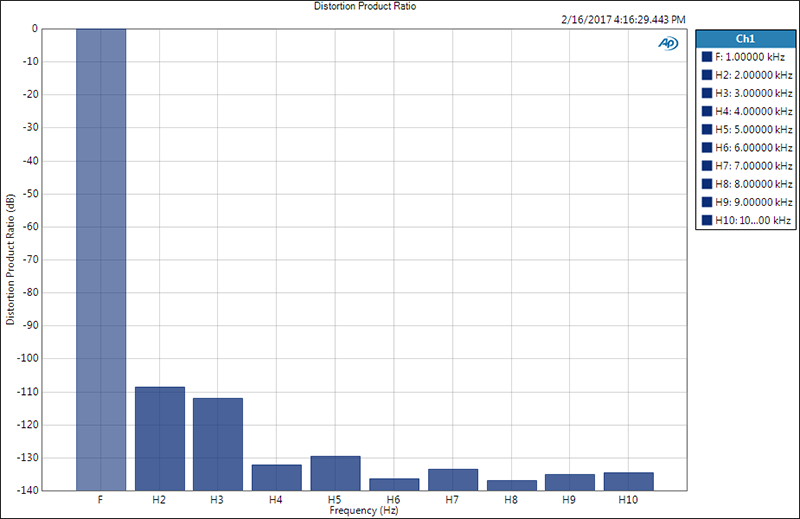 just a few words about this…

i haven’t seen many simple buffers that have this kind of performance with so few parts. there is no sound! so smooth and effortless. adding this to any gain stage isolates it from the load, and can add current to most tricky loads. bigger heatsinks and a richer bias mean more current to dump. of course, adding active distortion reduction and stabilization of the operating points and bias could further reduce the “presence”, and electronic character of the additional stage… but loading effects would swamp ANY extra crud this thing would add to the party. i dare you to compare this with any simple tube cathode follower circuit! it will mess with the most hardcore tubophile.

look at the measured ratio of the varying harmonics… an almost perfect triode-like spectra. the secret sauce here is the transconductance differences between the FET and the BJT. the pp operation sums with a little more degeneration in one half, which gives rise to a small increase in 2nd order harmonics. if both devices were perfectly matched, the 3rd would dominate. larger swings look even better with the third falling away more (!), until the swing gets close to the rails. in any case, directly coupling this buffer to the plate of a grounded cathode amplifier stage will add very little of its own character, and improve the character of your favorite tube!