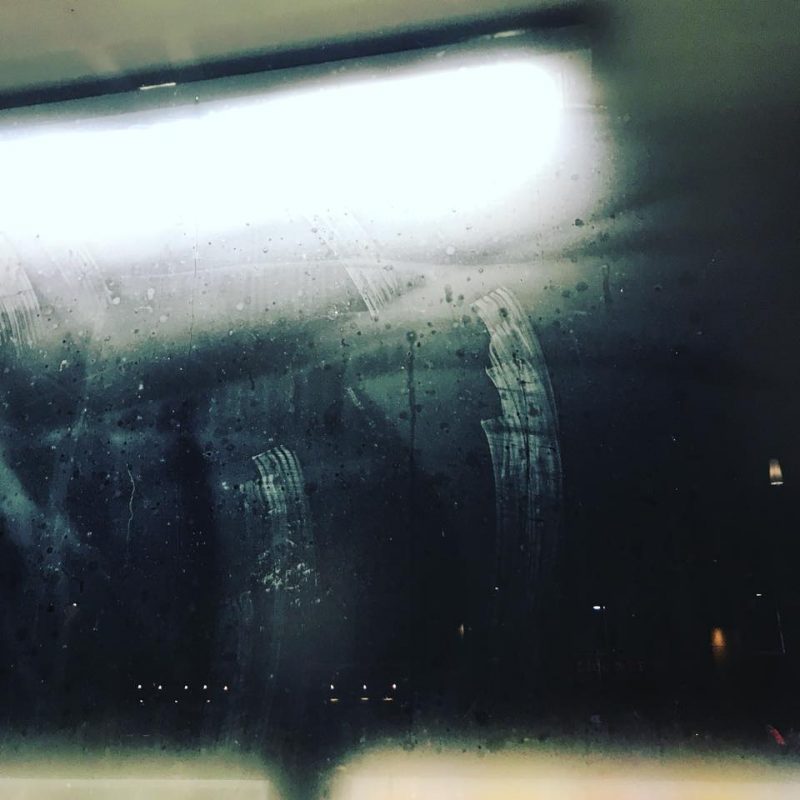 just back from etf and i have a busy head full of noise. that is not a good place for a mind like mine, to be. i need to clear the deck, before i land on it.

etf was fabulous. the lectures were great. the shootout, a wonderful laugh! meeting and collaborating with the tribe is nothing but intense be-here-now. the danes did an amazing job of keeping the spirit alive! but we weren’t simply among ourselves… our work and play was surveilled and commented on 24/7. pix and video were continuously uploaded, and the internet constantly monitored for response. me too! that is just how it is now.

and of course, like Laertes, i myself couldn’t look away. don’t get me wrong. it’s mostly positive and i wanted to go there… like a moth to the light. but not all of it was good. of course not!

one of the negative effects of social media is how diffuse a person can become just by joining the stream of information (and disinformation!) flowing by, constantly, all hours of the day… it doesn’t even seem to be necessary to actively take part! and the longer one is in there, just following along can be alienating enough. so much emotion can be spent on the nuances of personal, interpersonal and political data, a thousand miles from home. actually coming home can be a such shock, as well. “realtime” remote viewing of “reality” has a pallor of schizophrenia to it. there’s no “there” there in the stream… but it feels like there could be and in fact, something is happening through the peephole. but you can’t see it all, and the scale is so wrong.

i can handle in your face one on one, and up to several dozens… in person or as vaporware. petty conflict or burgeoning unity is all a part of it. but tens of thousands is not my thing. it’s just too distributed. too spread thin. and it leaves me too big for my britches or inconsequential. anything but human sized. the computer extends us, but not to human scale.

data and information, is NOT knowledge. without a context to fasten itself to, it is entirely moving, changing, and subject to strange interpretation. in the absence of context, we add our own sometimes addled point of view. it’s only natural… all by ourselves. and no one is there to check our/my head when plugged into that monitor. and the disinformation is supposed to be confusing. that’s why it’s there.

to stay right sized is hard enough without a “smart” phone, or laptop, constantly “informing” one’s decision making process real time. and, quite frankly, it doesn’t help that the world is such a twisted wreck in so many places near and dear to me. it causes vestigial rubbernecking.

in any case, etf is always so inspiring and a welcome lift in the darkening season.

the purpose of today’s post is just to catch up a bit… it’s been a while between posts.

i am interested in two primary directions when it comes to linear amplification…. open loop (no feedback error correction) and very very closed loop (shitloads of error correction). the middle isn’t all that interesting to me. “half measures avail us nothing”, or some such nonsense… i buy it! sign me up!

i have been making various arrangements of vacuum tube “op amps” on and off to do jobs other than drive speakers. non-linear electronics are simplified with op amps, and i enjoy the challenge of doing that with tubes. to achieve a useful circuit one needs a lot of gain, low output impedance, and several input possibilities. with gain come stability issues and tubes are a hot moving target, and high impedance as well.

previous efforts to increase the gain possible in one stage have led me to transconductance amplifiers and particularly, cascodes, tetrodes and pentodes. as i have tried to express before, there are numerous advantages to abandoning the Thevenin universe, and plunging headlong into the Norton… especially for very small signals, and also copious use of negative feedback error correction. in previous posts you will find some of this, but from time to time this requires updating.

some few years ago, Frank Blöhbaum introduced the “Best Pentode” circuit. i have mentioned it before in these pages… he has a well deserved patent on the idea and has implemented it with a marvelous bit of contrarian design in a circuit structure best described as a “multiplied transconductance amplifier”, or MTA (not to be confused with the bus and subway monster in NYC). one transconductance stage, cascoded into another accomplishes this… Frank uses a “Best Pentode” stage into a PNP type transistor. it’s a stable and mature approach at this point. the amps are amazing! two of them featured largely at etf this year. this circuit is described in Jan Didden’s “Linear Electronics” magazine, which is well worth a subscription.

“Best Pentode” combines high gain with reduced noise from the tube, because the screen current (separated from the cathode emission and then wasted, in normal pentode applications) is returned to the plate, both eliminating separation noise, and adding the screen transconductance to the total. a silicon screen transistor has so much hfe at the screen current level, it both keeps it’s own noise contribution to a minimum, and the low impedance insures minimum insertion loss. i would describe his circuit as a type of hybrid cascode structure specific for pentodes.

there are limits to any circuit, and this one is no different. in this case, the screen voltage reference is fixed and does not allow the pentode plate to swing below the reference voltage. the plate and collector are tied together… if it were to happen, the transistor becomes reverse connected and cuts out. there is also the matter of the base voltage for the transistor. it needs to be held relatively constant in relationship with the plate, while the current varies with level, and it can’t do this well at the voltage divider. this introduces a small lossy element that works against gain. it’s not a large effect, but it’s a limit.

Frank gets around this in various ways, for example, the above mentioned MTA circuit (folding a “Best Pentode” stage into a P type device that is loaded “downwards”). also, simply working with less gain and also a low screen grid voltage are good solutions. in any case, it hasn’t hindered him from using it to make circuits that drive transmitting type power tubes! however, the circuits are more complex because of this limit.

stability is also an issue… with high gain. and quite often, we are talking about using tubes that possess the highest transconductance attainable from the discipline, in order to get that gain: VHF or “wideband” pentodes. these pentodes are extremely sensitive components. at really high gain, rf, transit time, self oscillation, power supply changes, and even temperature variations can cause problems, along with the issues that always come with high gain and high feedback ratios and compensation. direct coupled feedback and sometimes servo control of bias or reference voltages is normal to working like this. believe me, i know!

i have been working for some time on pushing the envelope for gain over one stage, and have tested the limits of “Best Pentode” and wanted a little bit more. also, this is Frank’s circuit! not mine. and i just can’t leave anything alone if it’s interesting.

so today i would like to describe a variation of “best pentode” that can reach higher gain without additional stages… and remain stable. this is possible because of increased impedance and it has a fundamentally different method of biasing the cascode. however, because it requires a voltage controlled device to function (a tube or MOSFET), it is NOT capable of the lowest noise performance that Frank’s “Best Pentode” circuit is capable of. a bipolar transistor still has more transconductance than any tube or FET in this case. and the noise resistance across the circuit adds both the pentode AND the cascode device. i think that for phono and microphone work, “Best Pentode” clearly has the upper hand! but for simplicity, this variation may prove interesting. also, it becomes possible to make the circuit entirely with tubes. not that i care about that at all! but some may? and for use in a vacuum tube opamp, it offers some advantages over “Best Pentode”.

“Best Pentode” belongs to Frank Blöhbaum. i believe you may use it non-commercially, but MUST credit Frank in publication. 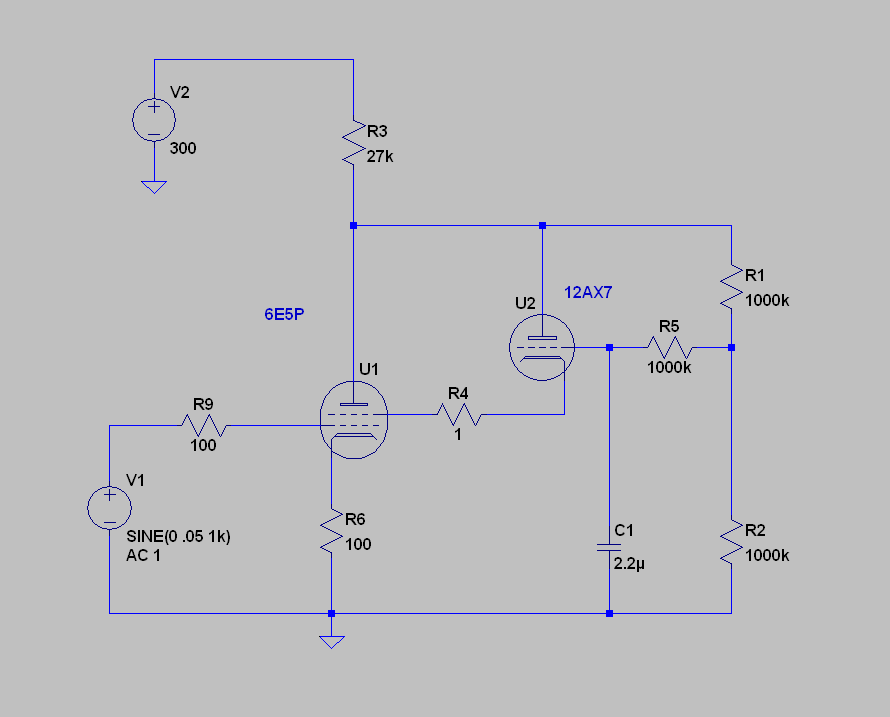 there are several subtle but important differences between this circuit and “Best Pentode” as Frank has published it. the most obvious is the DC feedback from the plate to the screen. he does in fact use strong DC feedback in his designs. but in this case, the arrangement provides the bias for the upper triode as well as stabilizing the plate – screen relationship, a voltage controlled device is necessary…  R5 and C1 strip the AC away from the plate, but also severely limit the current needed for a transistor base. only three connections are necessary now, instead of the four for “Best Pentode”. this is important for me. the high impedance input of a voltage controlled device increases gain.

of course, it can be improved by switching to a FET for the cascode device. and here i want to suggest an excellent but possibly overlooked part: the depletion MOSFET. distortion spectrum is better and the gain is slightly higher at the current one normally encounters through the screen leg of the circuit. 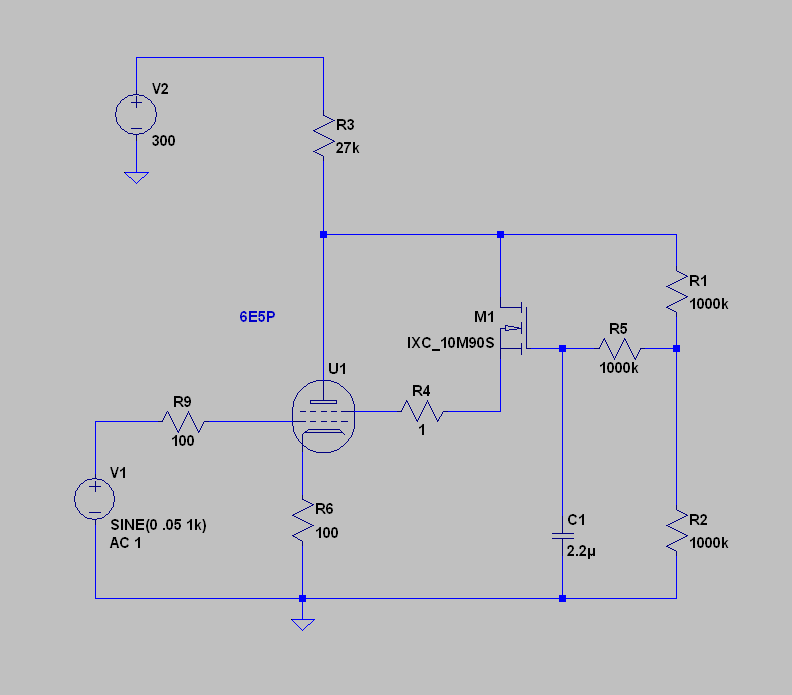 the available list for depletion MOSFETS is short, but sweet. nearly all of the high voltage parts are low distortion and simple to use. the BSP135, DN2540 and the IXCP10M90S are all good for this circuit.

okay. well that’s good, but “how do i use it?”. look below. a cascode current source loads the plate… the output from the pentode plate is sandwiched between the CCS and the cascoded pentode. the impedance at that point is very high. and so is the gain. 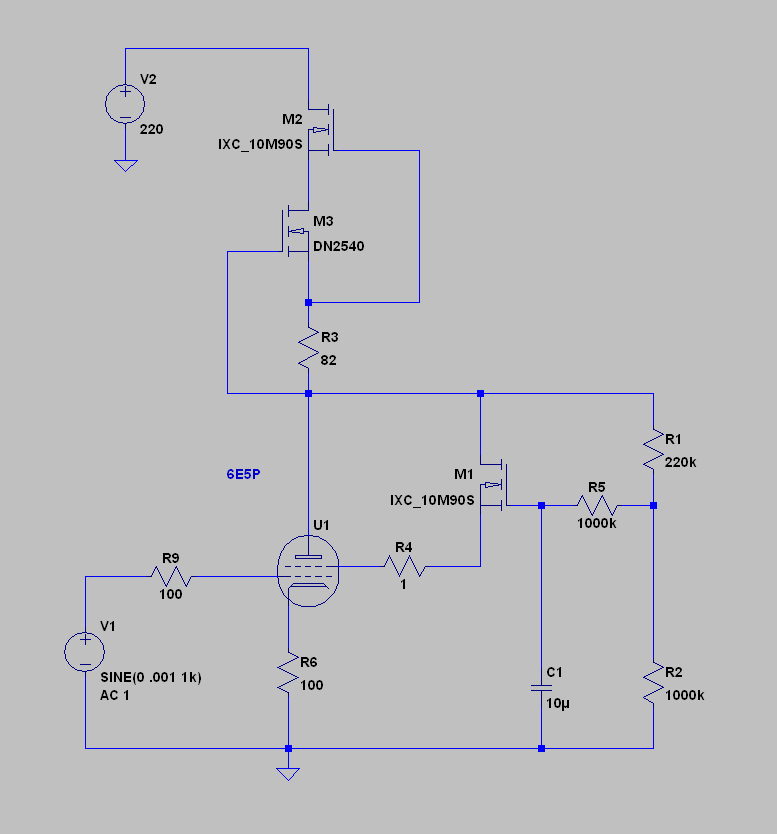 and here is a modeled sweep of the circuit above: this is actually remarkable.

i measured 95 dB with one current regulator MOS (not a cascode current source as above) and no special tricks! right off the bat. the cascode CCS will provide more gain. of course this will need to be followed by a buffer and some other conditioning elements, but i would like to suggest that the gain here is very close to the mu of the pentode! and it can be increased! this is with an unbypassed cathode resistor!!! note the similarity between this open loop sweep, and that of any basic opamp. except this is only one stage.

Frank sent me a correction and a reminder of a DC feedback arrangement that he described at ETF back in 2010, in normandy… i have to post this because it is even more elegant than my funky attempt above. this is his property, and enjoys the protection of his patent. enjoy. 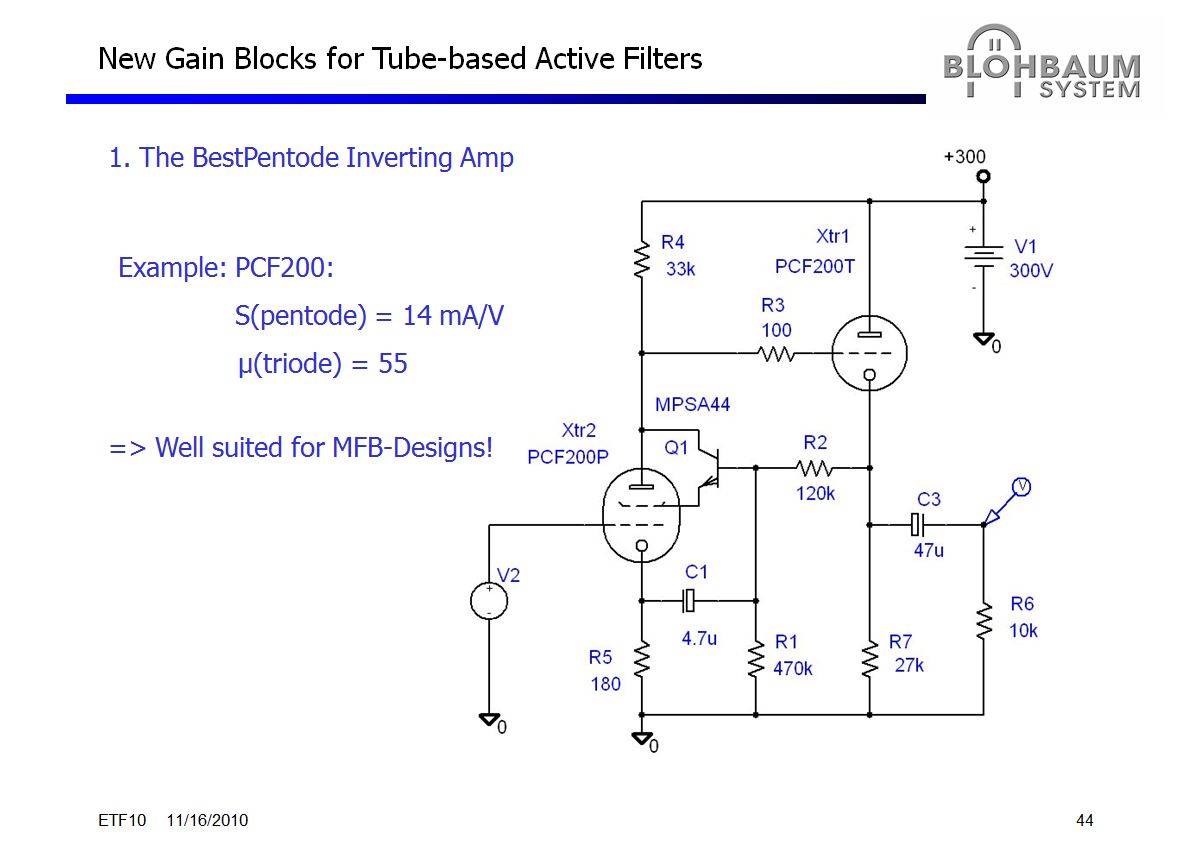