this post will mainly just be pix… and it is an addendum to a previous post: “race for the bottom”. continuing with my predilection for catchy monikers, i have given this bit of research and development a name. one i like. makes me think of “break pong” or congotronics… i like that stuff.

today i have detailed images of the construction of a subwoofer. it is a functioning Heil type AMT (air motion transformer) for low frequencies. it makes a fair amount of infrasonic pressure as well. it was used and tested in a four way speaker system at ETF 2017, which was held in Skt. Helene, Denmark. it was installed in an open baffle which doubled as a diffuser for the otherwise difficult acoustics. the room measured roughly 30 feet by 90 feet (10 m x 30 m) and had a peaked ceiling and reflective surfaces everywhere. the sub was crossed over at 55 Hz with a 48 dB/oct low pass filter, so all it really had to do was 2 octaves. LOUD! the finished unit should be understood as a single driver, and can be installed in any kind of baffle you might like, including a horn. by itself, it is incomplete. the open baffle worked well! but there might have been a bit too much of the back wave left to add…! we did get some complaints of too much bottom, although it tested good in sweeps. it’s difficult to really measure deep bass indoors. there is always so much of the room in the measurement. but, at a comfortable volume near the back of that room, really low tones require extremely small excursions… the distortion at deep bass, is insanely low. Oskar Heil might have enjoyed this? i do.

there are several ways to make an AMT for low frequencies, without the drive system Heil described in his patent… which was mainly to avoid the cost of using many drive units. although, it did also create a unique feature (the “Transvar”)! unfortunately that was the most unreliable aspect of his design… i have found that for deep bass, it is well worth the cost of multiple drivers.

of course, one can simply make a vertical chamber, and drive it with many drivers… or really big ones. i have already proven it can be done equally well push-push and single ended. while this will cause problems at higher frequencies, for bass, it is no obstacle at all. but i was more interested in the original approach.

one method is precisely the same as the way it is done in the patent, but with multiple drive units. in this case, each driver works into it’s own isolated chamber which is ported both to the front and the rear. because the motor structure takes up more room on one side of most modern drivers,  this makes for a somewhat asymmetrical chamber but the exits are identical. each driver in a chain of chambers, is wired in phase. there is some small harmonic distortion associated with this, because the driver will move more easily in one direction, that of the bigger chamber. of course, one could add wool or other damping material to tune that out… however, the whole point of the AMT is to transfer a small velocity at high pressure into a larger velocity at lower pressure. this means chamber excursion remains small under normal operation in an AMT. mouth velocity, is what we are interested in. this rectification effect is small. much smaller than what you would find with the same driver mounted in a sealed box working into free air.

the other method is to pair with a neighbor, who is wired out of phase. one chamber, with pairs of out of phase drivers… alternating exits, front and rear. this saves on material, because you no longer need dividers. the cone material is the divider…

this is the method i chose. i do not believe i have seen this done, ever. although, it mirrors what happens in a high frequency AMT, with a flexible diaphragm.

this was a temporary installation, just for the conference. but the chubby bumper will live on with a sealed box back, stuffed with wool, at a sound stage just outside of Malmö, Sweden. at some point i will take it outside and properly measure it. there was no time but for phase and level matching at etf.

we did hear it full range while setting up the baffle. there is so much to explore with this approach! it is really smooth and non-resonant. NO comb-filter harmonics!

it played all kinds of music, but the beastie boys and buddy guy really kicked concert level ass on this system. muddy waters and junior kimbrough were equally dynamic, but the elegance of those recordings came first. orchestral stuff was terrifying. 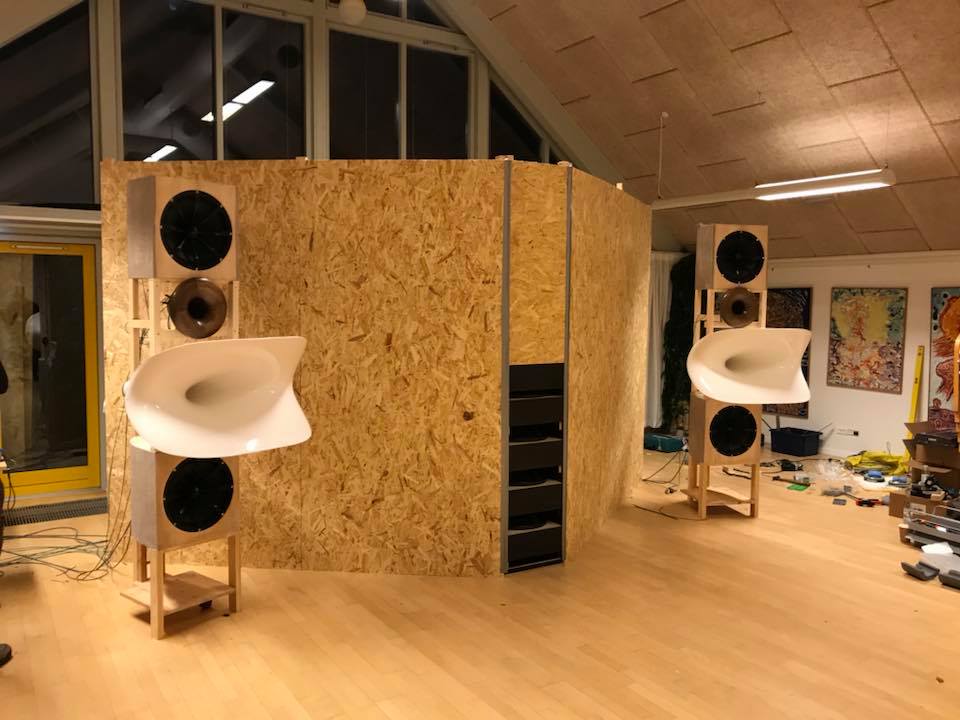 above you see the entire speaker system. the chubby bumper in the middle, 4 each 15″ Volt Radial PA woofers (the light cone version) in custom fiberglass and linen clad plywood bins designed and built by me and Sy Wilmer, two fiberglass “Iwata” midrange horns (200 Hz cut-off) that have been modified with the mathematics of Jean Michel LeCleach (made by Autotech in Poland), and a LeCleach tweeter designed and made by Jeffrey Jackson. the electronics that supported this were even more impressive.

i am very pleased with the end result of the system! it was capable of very high sound pressures with very little distortion. and it was put together in record time by some really different personalities, all with big heads and egos… myself included! and, without a fight! that we could all collaborate at this level really speaks volumes about the spirit of ETF. 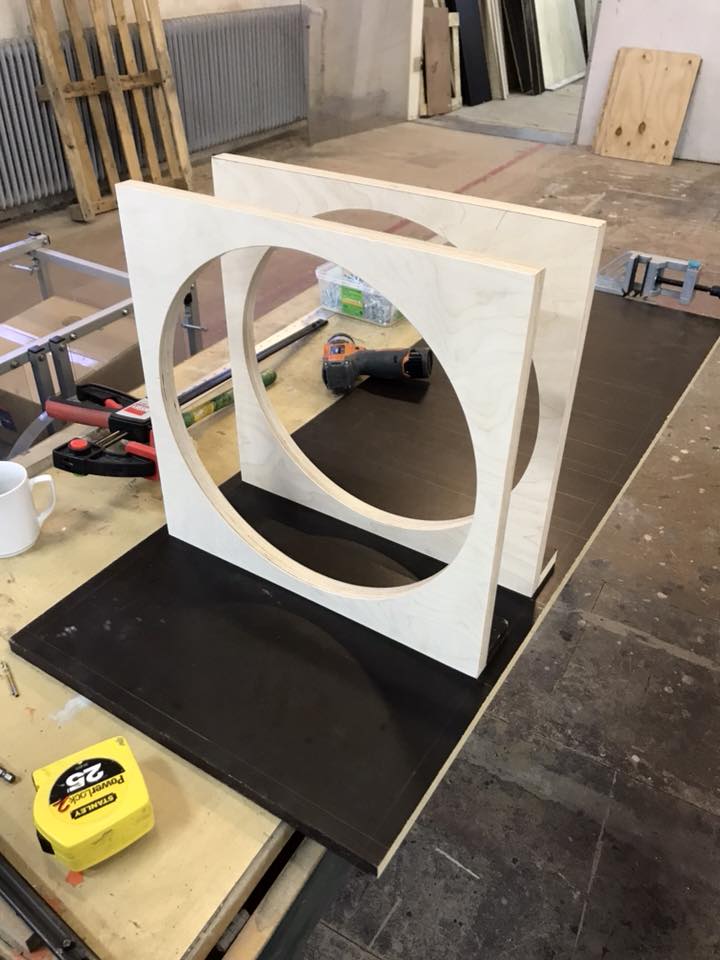 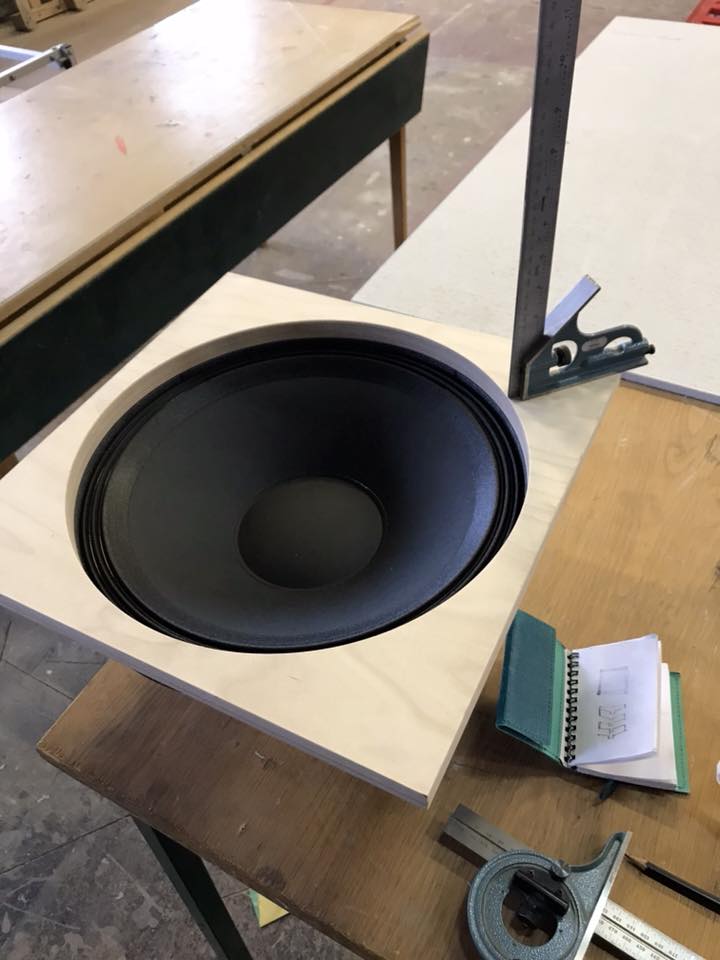 these speaker baffles were cut by Ali Atie at Jacaranda, for me to save time. He’s brilliant! 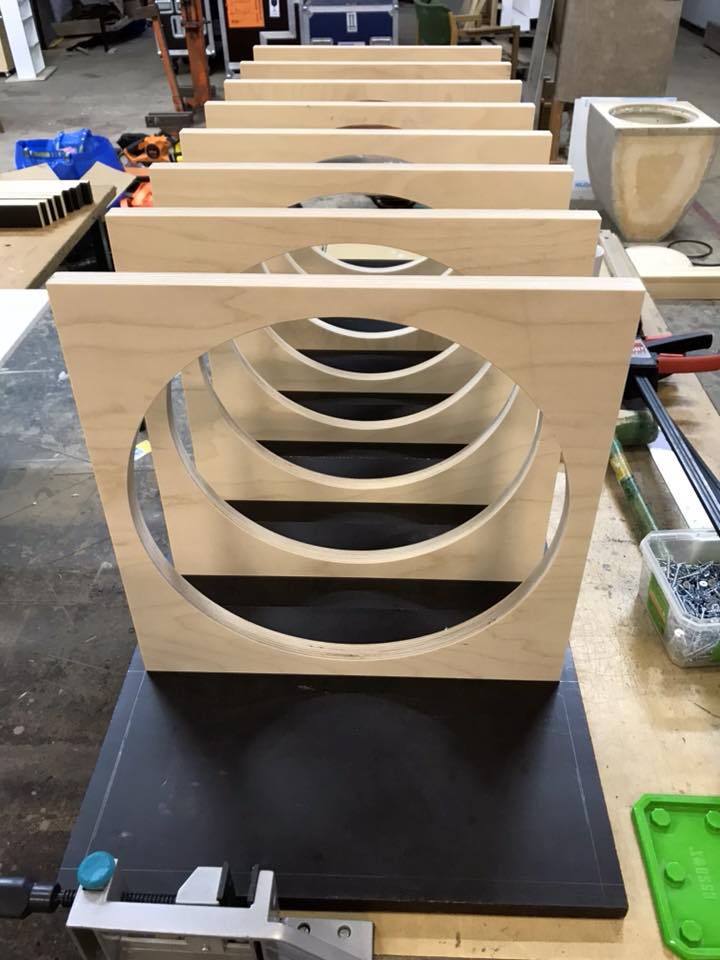 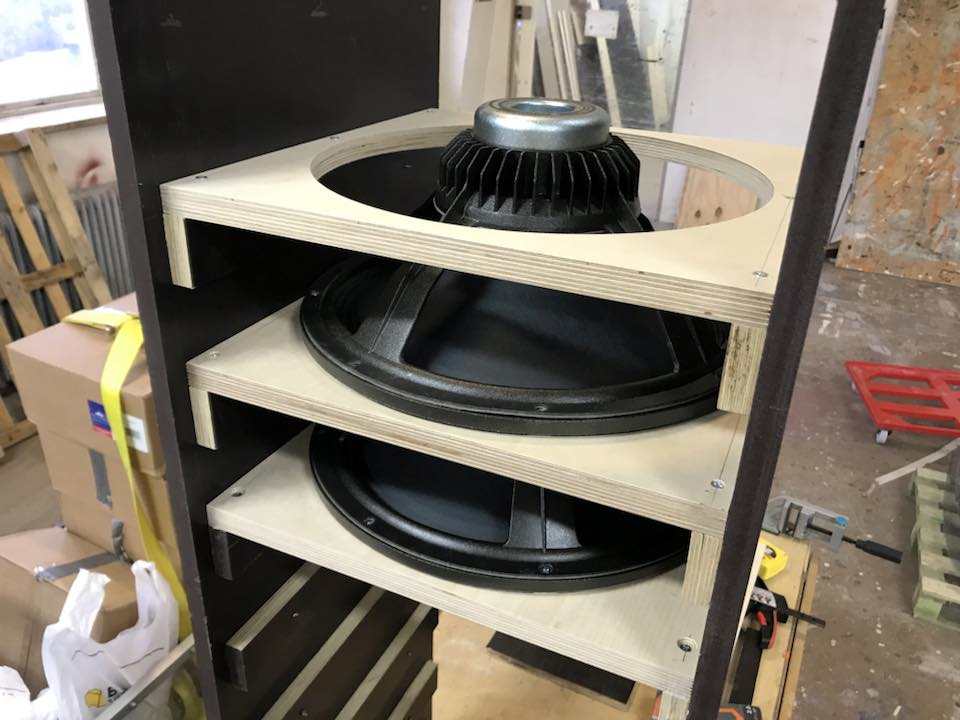 unfortunately, and i knew it would be an issue, this box has to be assembled with the speakers. because the drivers fit through into the space between them, there is no simple way to mount them afterwards, or remove them. 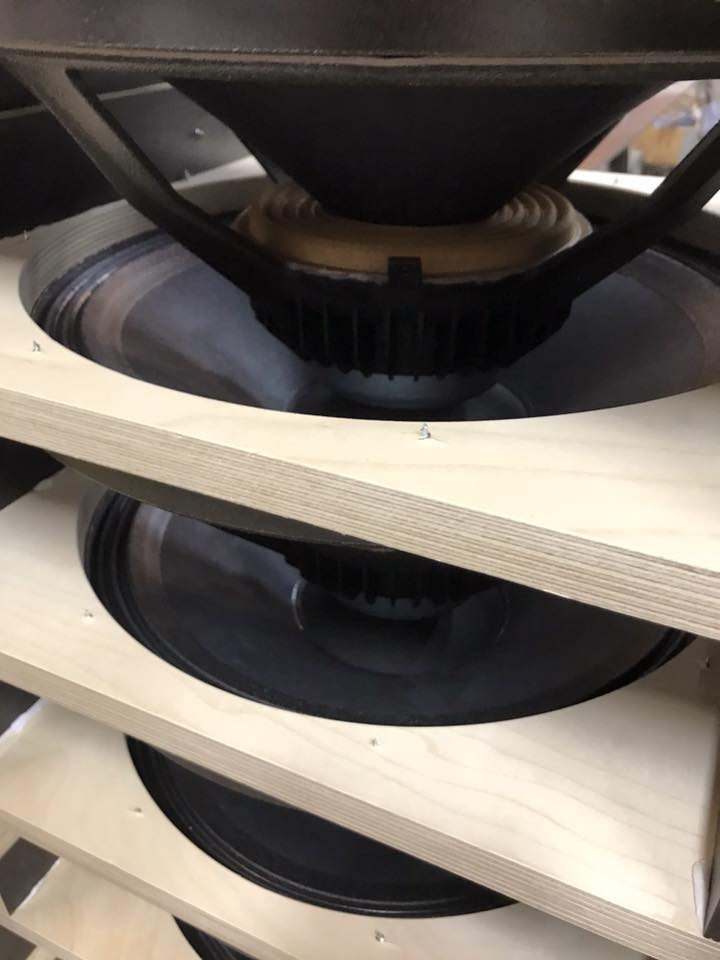 there is 1/2″ between the dust cover and magnet of the Eminence 3015LFs. there is nothing special about the drivers, other than they are reliable and not so expensive. because of the neodymium magnets, they weigh much less than typical 15″ drivers. that is my favorite feature. i think some DIY builders have some intense negative feelings about them, because they are neither expensive or remarkable. for the money, they are, in my book, fabulously valuable, and capable of good performance in a horn or an AMT! not to mention in public address, where deep bass is not important. these are good general purpose drivers… 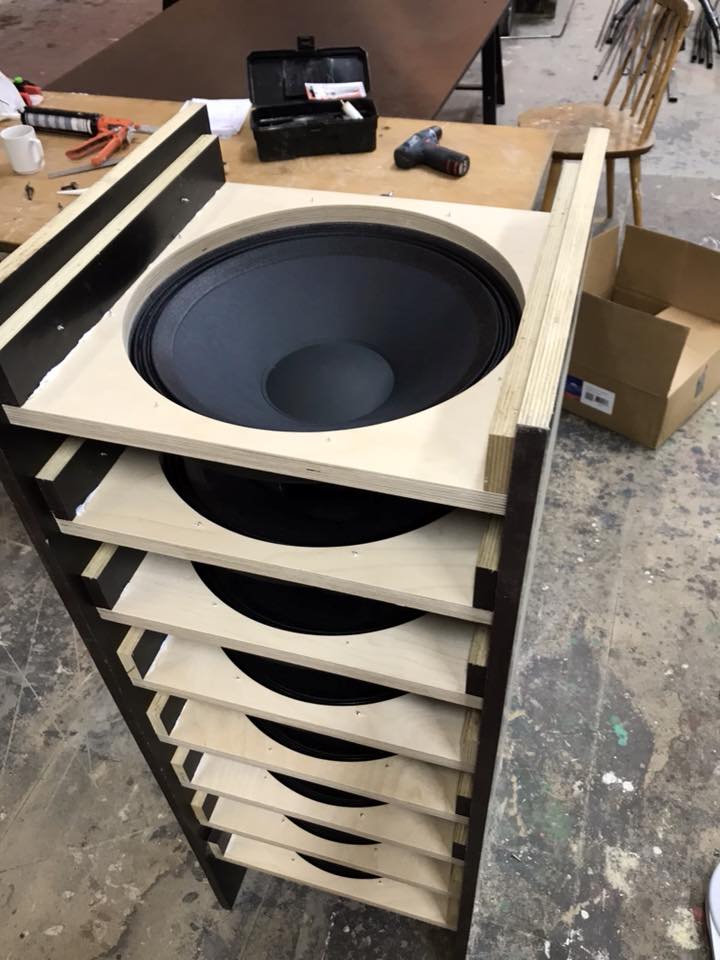 sides and drivers complete. i did not glue the sides, so they can be removed later if necessary. 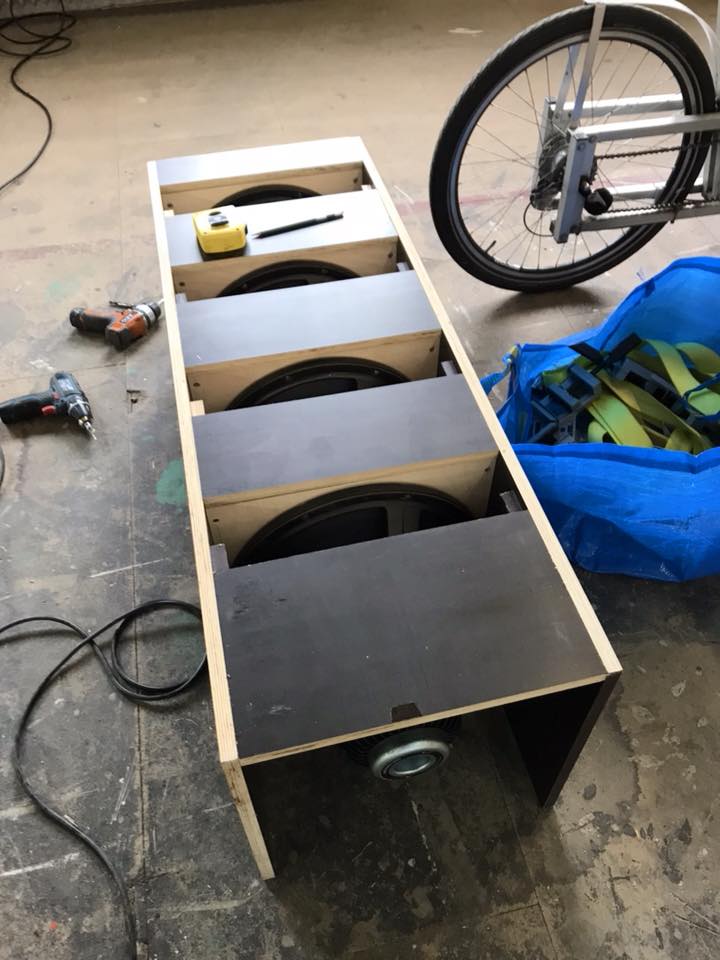 glued the fronts to the baffles, but not to the sides. 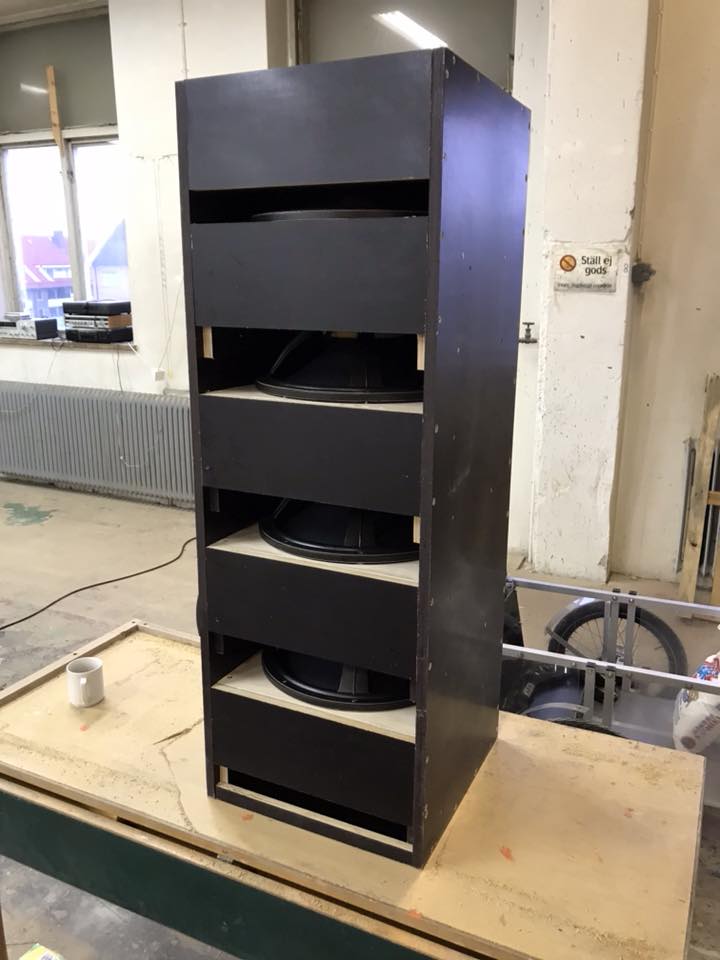 more soon… the picture below was taken by Jeffrey Jackson 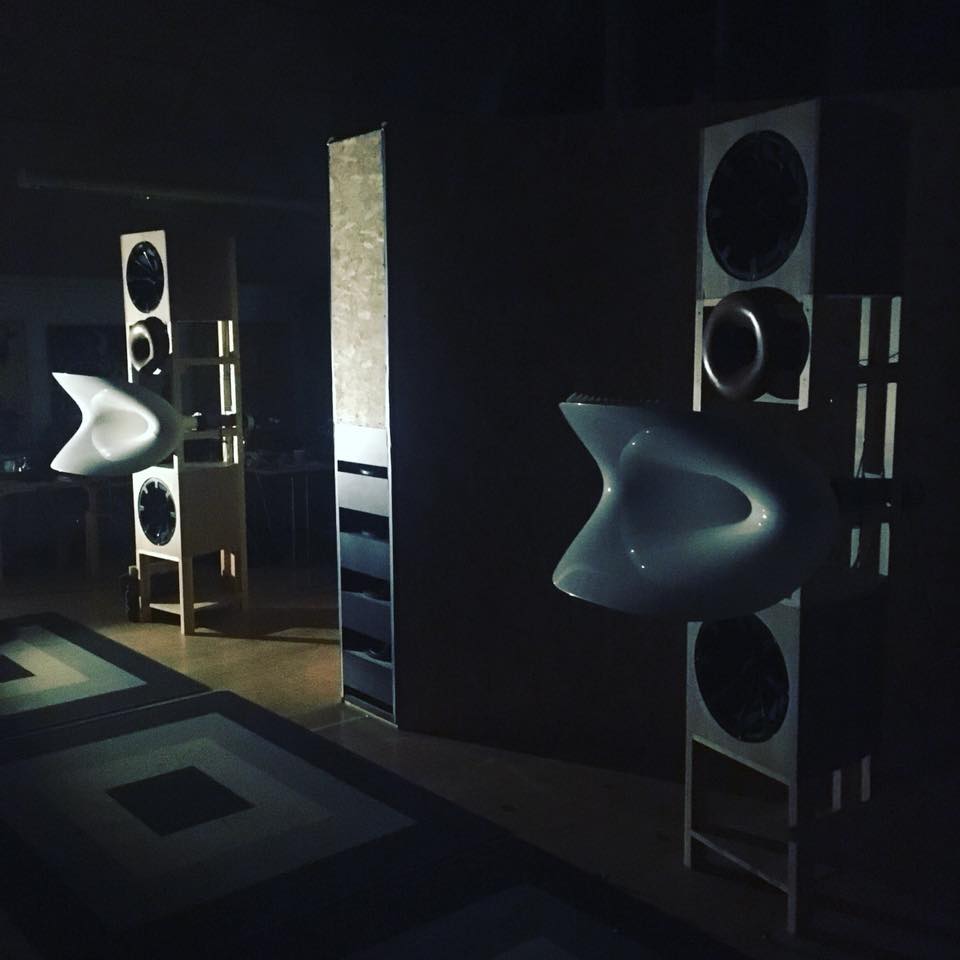