okay, in the last installment, i outlined 5 areas of improvement to the EH 12AY7 mic pre, to explore and an initial design for how to deal with some of them. these were, gain, isolation, a lower output impedance, distortion and noise, and improved power supply in support of the other issues. i intend to get into it, but first, i am going to inflict some more wandering brain on you… it’s my blog! go make your own.

you still do hear a LOT of tongue wagging and brouhaha over the “subjectivist/objectivist” dualism. i want to say something about this, because it has a bearing on what is happening here. i hope i don’t overdo it, but it was bound to require some clarification sooner or later. it is a work in progress, but the basic flavor is bitter, with a touch of bicarbonate of soda.

“subjective” critics of the traditional engineering approach, to solving the issues of electronically reproduced sound, tend (an understatement) to dismiss wholesale the significance of measurements and analysis based on research and testing. it makes no difference that all electronic gadgets have always involved the use of “high” technology, often based on new science, for the present day, or even in looking back. audio engineering is described by this camp almost as if it were alchemy or magic. for them, it IS! and, they are apparently afraid to know more of how that magic works. it is so prevalent and the group is large enough that this perspective is heavily reused in marketing many highly engineered commercial products today. ironic isn’t the right word to discuss this. schizophrenic is a better one. the difficult thing about this for me is that at the center of this perspective is one very important misunderstood and misrepresented truth.

“objectivist” or “rationalist” critics of the subjective camp self righteously point out the delusional aspects of this. but often have very little self examination of their own. in fact, the wall of outrage directed so intently at the herd on the other side of the river, seems to allow them to avoid this altogether. they are, as a rule, as dense and unpleasant as the others are, and even more defensive because they feel science makes them right. “it’s in writing, mathematics, it’s been measured, for crying out loud!” the status of their situation is seemingly more complicated than the others, because some of them have an awareness of the truth at the center of the other side’s weird universe, that they lack, and yet don’t want at all for themselves. even though it’s true. the less sophisticated ones are just assholes.

so what is this truth? it’s the thing they have in common. that they are obsessively fixed on the meaning of reproduced sounds… and desperately intent upon control of that. but, no amount of objectifying will limit, reduce or expand the range of what is possible. music is not a signal. it isn’t a bit depth. it is a cultural practice. it is subject to all of the messy motives people have. if the gear was really and truly “neutral” (i have a great deal of difficulty with the choice of words here) and music passed on through all the changes of state between microphone and loudspeaker, without the subtlest change… really transporting one from the present location to a site far away in perhaps both distance and time. well, no, it’s not possible in an “objective” sense. that is a ridiculous idea. that is the “subjectivists” truth. although they are generally clueless as to what it means.

reproduced music is not “real”. and whatever “reality” it may have once had, is so socially constructed these days that it can best be compared to fashion photography or advertising. “objectivists” seem terrified or angry that even reproduced, music could be so wildly representative and that the true measure might actually be in emotional or anthropological terms and not scientific ones at all. we live in the post modern time and the “facts” are that fake is every bit as important, or more so, as “real”, for millions and millions of people. the music business is built on that idea. the argument is a case for the emperor of clothes, or ice cream. not math. and resentment over it. what a miserable point of view. the “subjectivists” are at least more fun, even if they are full of shit. when it comes to reproduced music, fun counts for more than misery.

chefs and cooks mitigate technology, science and art day in and out. no one gives them a hard time about it. it is clear that the preparation of food is both rooted in cultural and technological history and innovation. it is also clear that a good chef needs good eaters to be appreciated. if you don’t like shellfish, who cares how well it’s made. yes, marketing and commerce confuse things here as everywhere. but a great plate of fish is very difficult to argue over, if you like fish. this clarity is utterly lacking in the playback world. marketing runs that world… it’s almost all lies, based on their own fear and resentment. and it doesn’t matter that much if it’s “objective/subjective”… they’re both missing the point.

enough. microphone preamps, even cheap ones, have a job to do. to get the signal from the transducer (and it can be a range of very different transducers) and get it into a size and form that lends itself to recording or post production. but it also has an aesthetic: to be “musical”. ahh! how infuriating…

the one “aesthetic choice” i make here, and it is a somewhat controversial one for the tradition, is that this cheap mic pre runs open loop. there is NO error correction applied. what is, is what is, as they say. now, that is not to say that i do not care about distortion or bandwidth… measured performance is very important to me. however, there is more than one way to skin a banana.

the first two areas of improvement were gain and isolation. fortunately, there is a component we can draw upon that fills the bill. a step up transformer. trannies get a bad rap in all but two places, diy hifi and recording studios! and that is funny, because it couldn’t be for more opposite reasons: in the diy world, its retro sex appeal and love of the object in itself. for the recording engineer, it is simply practical. transformers afford isolation from the hostile common mode environment. not just the canceling of it, which is the world of the instrumentation amplifier, but real honest to goodness isolation. accidentally connect the wall mains to it? who cares? flourescent lights? big schmear. 80 feet of mic cable next to a gas generator and a motor bong… no problem! that kind of practical is hard to ignore.

i bought some 1:3 SUT that appear to be tamura units from yamaha mixers from the 70’s. removed from equipment and sold on ebay for a reasonable price. let’s look closer at what they can do… 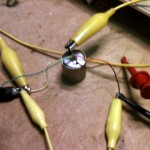 here is pix of a test set up. the signal comes from my marconi generator to the red and black primary, the scope is and shield ground are connected to the blue and white secondary. 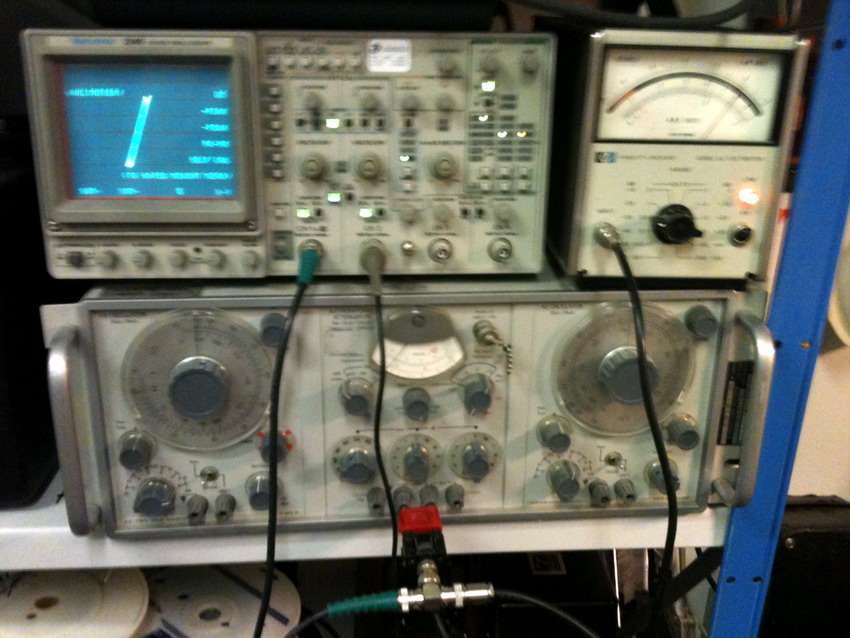 my test setup is a generator, oscope set up in X/Y with the generator on the primary and X ch, and the trans secondary on the Y ch. the AC voltmeter is on the input to make sure the generator is at the same level when i switch frequencies. sorry for the blurry pix. they were all taken with an iphone.

what you want to see is these next images which show the transfer characteristic of the transformer at 100Hz and 20KHz. note the phase shift (oval shape) at 20KHz… quite reasonable actually. and finally a 2V RMS input gives 8V and change PP out without compressing (you would see curvature or bending over). there is both cartesian and X/Y examples. good to know it will survive a closely placed SM57 on a snare…

now, the important thing here is that the trans steps up from a 600 ohm load nicely and the X/Y is a nice straight line to the right… and no wiggling or funny ground loop stuff visible. this is a good trans, especially for 20$ for the pair. you can expect to pay more than this generally, but good deals do come up.

now cinemag and jensen both make good brand new versions of this, as does lundahl and sowter and others. for vintage stuff, you can use whatever you can find, like i did. these worked out just fine. tamura is good stuff. adding this to the input of our micpre will add both isolation and gain. and they are linear and have enough headroom for the mics they would likely meet. all that is needed now, is to remove the input blocking caps and wire this in instead. it will be necessary to revisit the bass cut feature later, but that can be added simply by using an appropriately sized film cap switched in or out between the trans and the H pad.

the next change has to do with noise. in order to minimize distortion, i increased the voltage across the FETs by biasing the 12AY7s up, until i got the lowest 3rd harmonic. in this configuration, that turned out to be 18 volts. i would have guessed 7 or 9 would have done it. but the combination of these FETs with this tube worked out that way. this is NOT the lowest noise arrangement.

above 3 – 3.5 volts of drain source voltage, FETs produce an increasing amount of flicker noise. very similar to johnson noise but for different reasons. at or below this drain/source voltage, there is very little. so i have lowered the bias to 1.8 volts. this should put 3 volts at the cathodes of the 12AY7s with 2.5 mA between them. 1.8 V happens to be the breakdown voltage of a yellow LED, which is also very quiet. some kind of LED will make for a good voltage ref for the bias. the distortion is a little higher, but it is still very low (0.1% for 8V RMS out) and the pre gains some S/N (another 5dB). the step trans helps here too as it adds very little noise of its own and 9dB of “gain” ahead of the active stages. the increased current through the cascode helps a little too, and we are on the way.

the lower output impedance of the buffer stage can be accomplished 2 simple ways: increase the current through the tubes; and change to a beefier output tube. both work well and are easy to accomplish. we can change the cathode resistors to 10K each from 33K for a threefold increase in current… and we can use a 12BH7 instead of a 12AU7. the heater circuit will need to be adjusted to accommodate the extra current required by the 12BH7. this will make for a considerable improvement in output impedance without any fancy tricks.

ok, so the first four areas of improvement have had some solution proposed, and the way forward seems plausible. the power supply will need to be flushed out a bit to support these changes, but we can also improve the noise performance by regulating the B+rail and by making a better 48V phantom supply. that will be next.