i have been in south korea working on silbatone stuff and i wanted to post a little something about a cool circuit i’ve been playing around with for phono. i’m going to do a mic pre front end for ribbon mics with it soon. but it’s very very quiet (just under 1nV per root Hz) and sounds lovely. this is not for beginners or probably those who have a moral problem with hybrid circuits… but it is interesting anyway.

cascode circuits offer a way to build your own pentode out of two triodes, JFETS or BJTs, and have some advantages over standard pentodes… lower noise and no screen current. many have tried JFET/triode cascodes in an attempt to get even lower noise but still hang on to a “tube character”. i would have included myself into that group some time ago but now i believe this has it’s own sound and i prefer it for phono and mic pres… blasphemy! but i have still had some reservations about the harmonic spectrum of the typical cascode. tube or N type JFET (i love the 2SK146 and 147) with high Gm type triode (WE417 or 437, etc.) on top. it is ok for blues, jazz and rock and roll… but i haven’t been totally happy about the classical music thing, or the dense noise thing yet. cecil taylor records or cop shoot cop just doesn’t doesn’t sound it’s best… it’s just a touch too hifi, and that is a four letter word in my book! i think pentode operation has a better timbre even if the distortion is higher. Gm operation of a pentode or cascode can simplify the distortion spectrum over standard operation. i have mentioned this before. but cascode, even single ended, has a slightly forward exciting sound typical of circuits with a touch more odd than even harmonic content… even more so balanced. the distortion is very very low! but the timbre isn’t perfect.

but i have found my new toy! hybrid folded cascode.

as far as i know, folded cascode was done first in audio by john curl (?) with JFETS. he does folded complimentary balanced circuits that are a study in symmetry and beauty. they also work as good as it gets. i think he is still the master of it, but the technique has expanded into chip design for memory and many many other jobs too. a folded cascode is a complementary amplifier in cascode which requires an added resistor to leverage the I/V conversion between the two halves. because the two amplifiers can be independently biased and loaded, it is possible to “tune” the response with more finesse than with a more standard cascode. using a P type JFET folded into the cathode of a triode is a way to have a complimentary amplifier with a pentode like transfer charateristic. the gain can be modest or high, depending on the configuration, and it can also be arranged as a Gm amplifier. i know of no one who has made anything commercial with this other than us… but now you can make something with it! have fun!

here is the basic idea as i have been using it. this is a Gm amplifier (loaded with a constant current source) and a resistor to ground. in this case, i am using a very large valued resistor (1 meg) and getting 60dB of gain… (the sim says 68dB). that is mainly due to the JFETs… solid state varies 1000 times more than tubes in it’s characteristics.

and here are some pix of the circuit in the flesh… the other tube you see is a bendix 6900 used only as a buffer for the folded cascode. the empty tube socket eventually gets a WE437 for make up gain after the RIAA filter. that goes beyond the scope of this discussion. today we are only looking at the first stage, which is a hybrid folded cascode circuit using 4 each 2SJ74 PJFETs and one D3a wired in triode. what you see is the transfer characteristic at 10KHz with 3mV input. the scale is expanded for detail (uncalibrated). 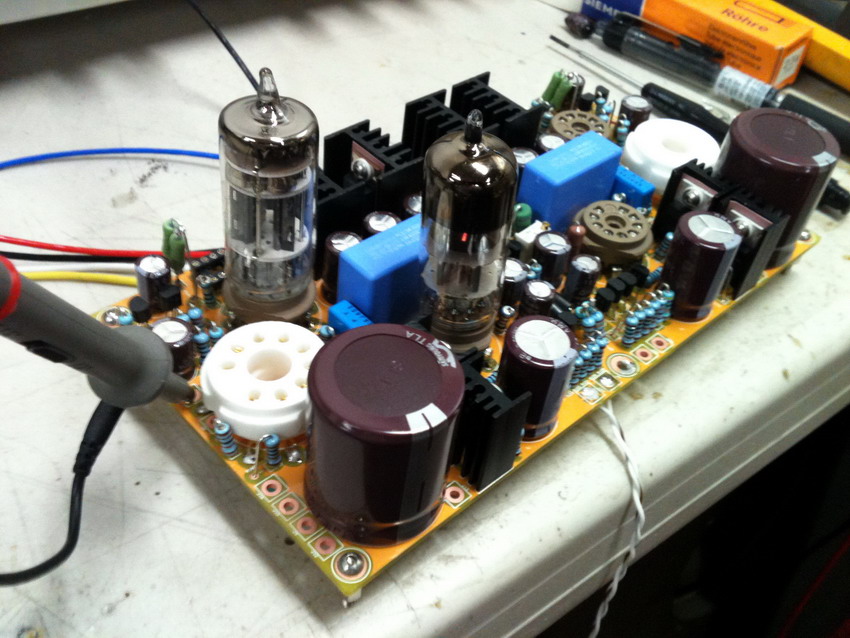 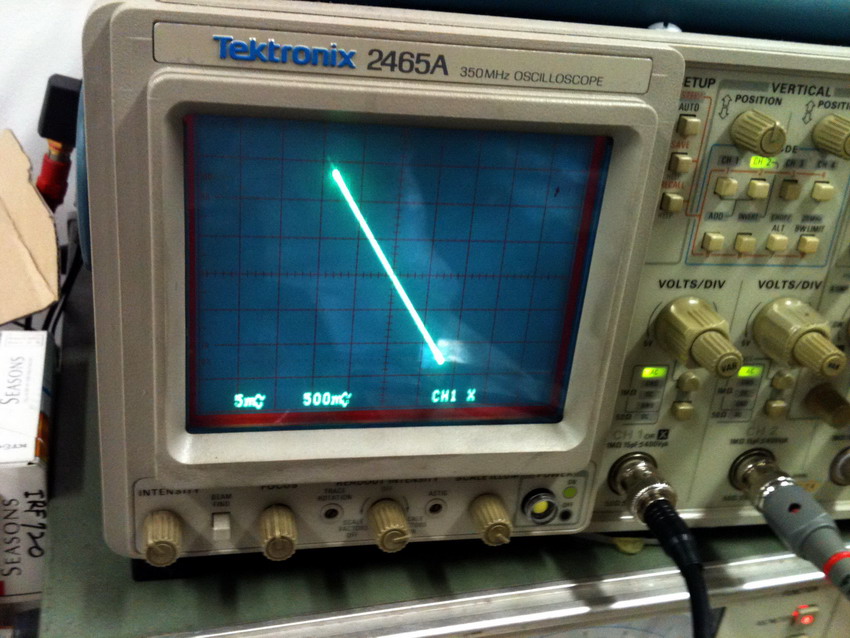 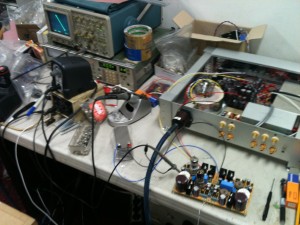 badass. i know it’s not good to brag but this is really very good. actually, it performs very nicely, but most importantly, it sounds just lovely! pix to follow of the entire phono preamp…