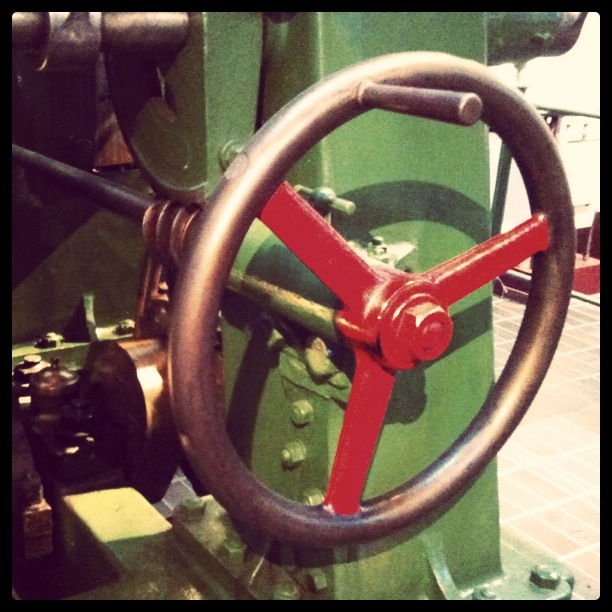 in the previous postings, i started rambling about rock and roll distortion, and even a little bit about how to make make some. but, now i want to get a little more into the subtle issues. again, this is introductory and in blog form… it’s a huge subject that a book could be devoted to. as always, we can just start somewhere, and build on it later.

i mentioned the possibility of both “soft” and “hard” clipping and put up some images of what it would look like on a scope. the addition of odd order harmonics (3rd) and frequency emphasis/de-emphasis are key elements to the sound, but limiting (clipping a waveform is unambiguously limiting it in amplitude) is also a crucial feature. why? given enough gain after the input, the dynamic range of the output is brutally reduced. it doesn’t make any difference if the input signal is small or large, one size signal comes out. this translates into an overall smoothing of variations and a smearing of all intent or accident into one contiguous sound.

a brilliant feature of this radical reduction in dynamic range, is another interesting effect: sustain. because small signals are boosted to the amplitude of the clipping threshold, and large signals are reduced to the same, any overdrive or decay is essentially transformed into one long (sometimes insanely so…), one sized event. think of carlos santana playing lead in “oye como va”… that was a big muff, the classic clipper fuzz.

sustain is an interesting transformation of the guitar. electric guitars are plucked instruments whose decay has mainly to do with the lossy qualities of the mechanical parts and the thermal absorption of the materials it is made out of. those instruments made with bolt on necks and light wood and metal parts (stamped steel bridge) have very little natural sustain and a signal envelope that rises fast with plucking the string and dies out soon after. it’s NOT a piano. the fender telecaster would be a good representative example of this kind of thing. the resonant qualities of the physical construction don’t help either in storing much energy in the bandwidth of the instrument (to drag it out longer). twang! by adding a fuzz box to the signal chain, this percussive dynamic sound is transformed to a smooth legato vocal or bowed like sound that pushes the guitar into roles other than comp or texture, which was the first role of the guitar. now, the guitar is a voice. for good or evil? hahhahahahahahahah! jimmy page used a distorted telecaster in “heartbreaker”, so that may hint at the answer to that question?

clippers are a good place to start with this stuff because they are simple. but their simplicity also makes them one trick ponies… all the way fucking out. that’s an important concept for the effects business. every box, a specialist toy. you can understand right away how idiotic hifi is as a business model today: a bunch of old smelly men, looking for status and distraction, in all the wrong places. the sense of exploitation is both closer to the surface and the herd more obviously delusional. for every piece of hifi gear sold, hundreds of musical instrument or pro audio gadgets are sold. it’s a really big business. i wander… if clippers are the logical far end of the distortion business, then what comes at the beginning?

“overdrive” is the industry term for small to considerable amounts of level sensitive progressive distortion. it can go as far as total clipping madness, just as fuzz boxes automatically do, but it can take a while to get there, and do some other things along the way. as i briefly mentioned before, exceeding the input range of a gain stage, deliberately, will also distort the output signal more or less, and depending on the arrangement, can wind up clipping or, even cutting off the amplifier entirely. clippers can’t do that in a progressive manner, because of the generally restricted dynamic range. not to be underestimated in the subtlety or heinous destruction possible, overdrive can be crudely described as having both more dynamic shifts in effect AND a wider range of possible harmonic and enharmonic sounds.

because there is a period of transition from “clean” to distorted, and this range can be related physically to the fingers of the musician, a “touch sensitive” character to the effect is often the important quality. with fuzz, there is no touch… it’s all or nothing (actually, it’s all or noisy). overdrive is ALL about the touch. but how does one build that into a design? good question? i was hoping you might ask… (talking to oneself is a sign of madness).

the transducer responsible for getting the movement of the guitar strings into the amplifier is generically called a “pickup”. it is a magnetic pickup related intimately to an alternator… the magnet(s) and coil are fixed and the steel strings move. by varying the field in proximity to the coil, an alternating current is induced in said coil. there are 2 common arrangements of this design: the single coil and the humbucker. the humbucker is essentially just two out of phase series connected single coils with one positioned to cancel common mode… (by reversing the magnetic field in one) it does this at the expense of some bandwidth, but gains output. 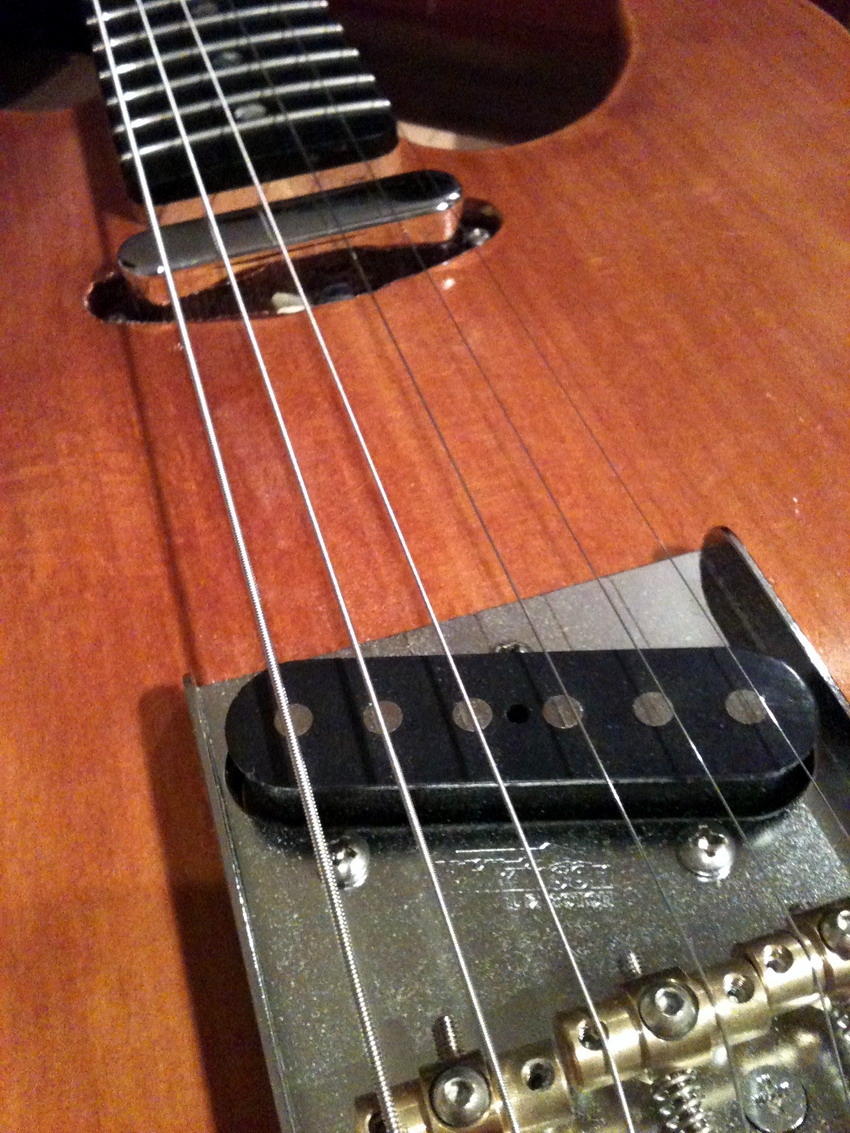 as you can imagine, it is not a particularly sensitive approach… the strings don’t have much mass or flux varying permeability and the magnets have to be powerful and the coil thousands of turns. just in order to get 50 – 300 mV of peak AC signal… all that copper and impedance invites stray pickup… especially of line voltage. shielding helps, but the long cables typically employed mean hum and noise pickup. i can imagine jeffrey jackson or dave slagle making field coil pickups, with pure iron or permendur poles! if they don’t, someone will sooner or later. but it was talked about here, first, you johnny come latelys… i don’t care. it won’t make or break the system. humbuckers can double the output and can have decent common mode rejection… but the sound is different. a bit less dynamic. more rolled off and midrangey. fortunately, musicians are WAY more pragmatic about this sort of thing than audiophiles generally are. the electronics that follow are heavily relied upon to fix, enhance, or modify shortcomings of the transducer/instrument front end.

okay, given that the input range will go from nothing to approximately 50mV (vintage single coil) and up to 1 V peak to peak (“super hot” humbucker), that gives one a place to start. the amplifiers typically used for guitar sound reinforcement are already designed with this input sensitivity in mind. exceeding it will overdrive the amp. that is a discussion for another day… because there is always some kind of input level adjust at the amp, differences in pickup type and output level can be taken to account. in designing an overdrive effect unit, we will want to match the output range to something similar.

in a previous post, i drew a test jig in which the bias, load and power supply range could all be adjusted. the purpose of doing this was to be able to practically experience what shifting the operating point deliberately into the “wrong” could do for effect. if we drive this stage with a good clean signal, and provide some guitar sensitive eq to the result, this will make an excellent test bed for overdrive. let’s have a closer look how this might be arranged…

the original concept has been developed here to include a safely adjustable B+. with the “bias” pot at 2.7K, the “load” pot at 220K, and the B+ pot at minimum setting, this is the operating point you might wind up with… lets look at the waveform.

ahhh, nicely clipped! with 1 VAC pp sine wave in, we have a very slightly asymmetrically clipped 70 VAC pp. with only 630 mV of bias on the 12AX7, even self biased, we have totally exceeded the input range.  lets mess up something else… just by turning the “load” pot down to 20K, and leaving the other pots as they were, we get:

and the waveform is now very asymmetrically clipped and the distortion is much more complex.

finally, i will leave you with the next logical development. here, we have a “clean” gain stage with some house cleaning added… the 68K grid resistor helps with the rfi and emi crap the cable and pickups find. the cap bypass, so often hated in hifi, and so truly beloved in musical electronics, is very important for leading edge “bite” and dynamics. some of the “touch” comes from doing it this way. now, the input range can be pickup sized: it’s shown as 50 mV. danelectro territory. the 1 meg input gain adjust pot is the grid leak for the overdriven stage… with the “bias”, “load”, and B+ pots all set as shown, here is what you get…

here are images of representative waveforms of this approach. soon, we can add some EQ and further housecleaning…